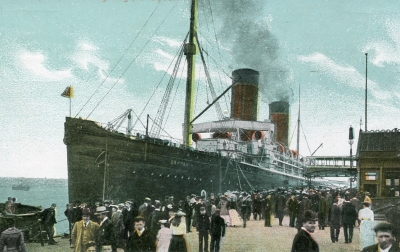 Campania was built for the Cunard Steamship Co. by Fairfield Co. Ltd, Glasgow, and launched on 8 September 1892, entering service in 1893. The Campania’s twin screws were powered by a ten-cylinder triple-expansion engine, giving an impressive service speed of 21 knots. During her first year in service the Campania took the Blue Riband for the fastest Westbound and Eastbound crossings. Along with her sister ship the Lucania the ships operated as Cunard’s primary transatlantic passenger liners for fourteen years.

In 1914 the Campania was sold for scrap but was then resold to the British Admiralty and converted to an aircraft carrier to carry seaplanes. As part of the Admiralty refit, the forward funnel was removed and replaced by two smaller ones in order to make room for a flight deck.

On the morning of 5 November HMS Campania was anchored off Burntisland, along with a number of other Navy vessels, when a sudden force-10 squall caused her to drag her anchor. Campania collided with two of the Navy vessels puncturing her hull and causing the engine room to flood. She sank a few hours after with no loss of life.

The Campania lies in an area of notoriously poor visibility and exceptionally strong tides. The wreck is in one complete section approximately 200m long by 20m wide, lying on the starboard side with the bow to the north. Depth to the seabed is 30m and the highest point of the structure stands up to 20m. There are a lot of intact portholes remaining, many with glass remaining.

NOTE: In 2001 Campania was designated a protected wreck under the Protection of Wrecks Act of 1973 and in 2013 reclassified as a Historic Marine Protected Area. Designation does not prevent public access, but divers must not remove artefacts or interfere with the wreck in any way. Contact Mark Blythe at Dive Bunker for further information on diving the wreck.