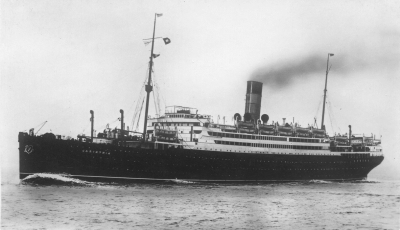 The Carinthia was built by Vickers Ltd, Barrow-in-Furness and launched on 24 February 1925. The maiden voyage departed Liverpool for New York on 22 August 1925. Carinthia was designed for a cruising role during the winter season and completed a world cruise in 1926-1927. When war was declared in 1939 Carinthia was immediately taken up by the Admiralty and converted to an AMC, becoming HMS Carinthia. HMS Carinthia was sailing in convoy from Gibraltar to England when on 6 June 1940, she was hit by a torpedo fired by U-46 (Commander Englebert Endrass) west of Galway. 4 lives were lost.

The wreck of the Carinthia is one of the most recent Cunard shipwrecks to be discovered and dived and is is deep water 30 miles from land. The Carinthia is a large wreck with many interesting features to explore. The impressive bow lies on its starboard side and the massive port anchor is still in place. The stern area of the wreck is also very intact and stands nearly 10m proud. The forward mast sticks out dramatically from the wreck horizontal to the seabed.