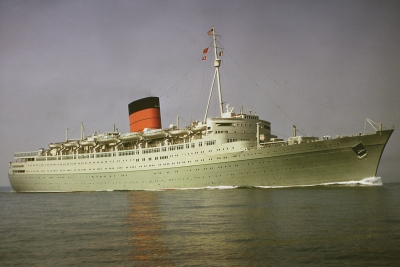 The Caronia was built by John Brown & Co. Ltd, Glasgow and launched on 30 October 1947 by HRH Princess Elizabeth. On 4 January 1949 Caronia made her maiden voyage under the command of Captain Donald Sorrell from Southampton to New York. Caronia was designed for a cruising role and undertook an annual World Cruise. She attracted a loyal following of wealthy repeat passengers including many American millionaires. A 1956 refit introduced air conditioning to ease passenger comfort on voyages to the warmer climates.

By the early 1960s increasing numbers of passenger were switching to air travel and both the transatlantic and cruising Consequently the Caronia and several other Cunard ships were withdrawn from service. In 1967 Caronia was sold to a Yugoslavian group, who had planned to use the ship as a floating hotel in Dubrovnik. This did not materialise and she was sold to Star Shipping and renamed Columbia. Following a refit in 1968 the ships name was changed again to Caribia. The Caribia was based out of New York running cruises to the Caribbean. However, the ageing ship was plagued by mechanical problems and after passenger complaints was sold again.

The Caribia sat neglected in New York for five years before finally being sold for scrapping in Tawain. She left New York for the last time in New York under tow from the ocean-going tug Hamburg. On 12 August 1974, when 3 miles off the coast of Guam, Hamburg got caught up in tropical storm Mary. While battling strong winds and heavy seas the tug experienced serious engine problems and the captain decided to seek refuge in Apra Harbor to make repairs. But the Hamburg no longer had the power to control her tow and was at risk of running aground. With his own vessel in danger, Captain Spannhake made the difficult decision to cut the Caribia loose. This resulted in the Caribia grounding on the tip of Glass Breakwater at 9.15 a.m. The next day the Caribia’s stern slid off the breakwater into the deep water of the harbour channel. On 23 June 1975 worked commenced on salvaging the wreck and this was completed on 30 June 1977.

Prior to the salvage operation divers enjoyed a brief period honeymoon periond diving an intact ocean liner. These days there are only a few items of random wreckage scattered along the sloping ledge of Apra Harbor. There is no doubt that some of it is part of the Caribia (ex-Caronia) but it is very difficult to identify what parts of the ship they are from.

NOTE: divers should be aware that unexploded Second World War ordnance is still present in the waters of Apra Harbor!