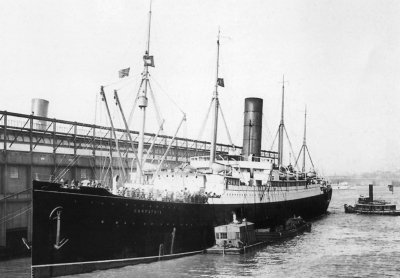 Carpathia was built by Swan & Hunter, Wallsend-on-Tyne, and launched on 6 August 1902. She sailed on her maiden voyage from Liverpool to Boston via Queenstown (Cobh) on 5 May 1903. The Carpathia was of steel construction, with a single funnel and four masts. The engines were eight cylinder, quadruple expansion, built by Wallsend Slipway Co. and powered by twin screws. The original tonnage was 13555 but this was later increased to 13603 when changes were made to the passenger accommodation.

For most of her career the Carpathia operated on the Trieste - New York and Liverpool - New York routes. The most famous incident in Carpathia's history came on the night of 14/15 April 1912 when she received an SOS call from the Titanic. Carpathia raced at full speed the 58 miles to the scene but by the time she arrived the Titanic had sunk. Carpathia picked up all 705 survivors from the life boats and took them to New York.

The Carpathia remained in commercial service during WWI but was sunk by U 55 on 17 July 1918 with the loss of 5 lives.

The wreck is starting to collapse in on itself quite a lot but there is still a lot of wreckage to see. At the bow she is very flat with just the winches standing off the sea bed. As you move aft the midships gets higher and more intact, nearly 10m off the sea bed and the stern is perfectly intact with a list to port but is very obvious and easy to navigate around. The stern is the shallowest part at 143m.

Due to its remote location and extreme depth the Carpathia has only been visited twice by scuba divers. The wreck is owned by RMS Titanic Inc.