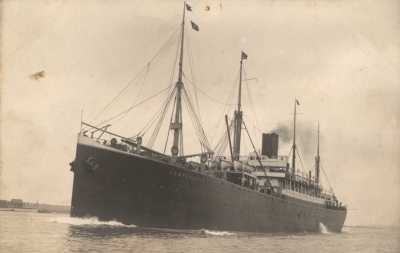 The ship was built by Palmer Co. Ltd, Jarrow, and launched on 29 August 1901 as British Empire (3) for British Shipowners Co., entering service in 1902. In 1907 the vessel was sold to Navagazione Generale Italiana, when she was renamed Campania. From 1909 she was chartered to the Northwest Transport Line, sailing the Hamburg to New York route and calling at Rotterdam. In 1910 the company became the Uranium SS Co., and changed the name of the vessel to Campanello to avoid confusion with the Cunard Campania. When the First World War started the Hamburg to Rotterdam service ceased and the ship was bought by the Royal Line. In 1916 she was acquired by Cunard and renamed the Flavia.

On 24 August 1918 on a voyage from Montreal to Avonmouth, Flavia was sunk by U 107 30 miles off the north-west coast of Ireland.

The Flavia lies with a list of about 20 degrees to port. Most of the upper decks are completely gone, leaving the boilers and machinery proud and completely exposed. Only a metre or two of the hull can be seen sticking out of the sand on the port side, whereas the starboard hull is 4–5m high in parts. The stern stands higher than the bow and one propeller is visible.