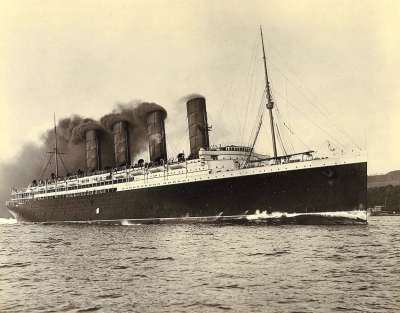 The Lusitania was built by John Brown & Co. Ltd, Glasgow, was launched on 7 June 1906 and commenced her maiden voyage on 7 September 1907. Steam turbine engines powered quadruple screws, giving a service speed of 25 knots. At the time she entered service the Lusitania was Cunard’s largest vessel to date. She was joined by a sister ship Mauretania in November 1907. Over the next few years the both vessels gained the Blue Riband and dominated the Transatlantic service.

At the onset of WWI Lusitania was listed by the Admiralty as an Armed Merchant Cruiser (AMC) but remained in commercial service on the Atlantic route. The Lusitania left New York on 1 May 1915 and what was to be her final voyage, despite warnings that German Navy were targeting all Allied shipping. On 7 May Lusitania was struck by a torpedo fired from U 20 commanded by Walther Schwieger. A second explosion occurred that was initially thought to be a second torpedo, but later, the U-20 commander’s log confirmed that they had only fired one torpedo. The Lusitania immediately started to list to the starboard and sank in just eighteen minutes with the loss of 1,198 lives, including 123 Americans. Although there were enough lifeboats, the listing of the vessel prevented those on one side from being launched.

Diving on the wreck of the Lusitania has become as controversial as the circumstances of the sinking itself. The wreck is owned by American Gregg Bemis and was declared as a protected wreck by the Irish Government in 1995. As such, any diving on the wreck requires permission from both the authorities and the owner. The wreck started to become a popular technical dive in mid 1990s with the introduction of mixed-gas diving. In 2004 at the age of 76 Gregg Bemis himself dived the wreck. In the last decade rebreathers have been used extensively on various authorised diving expeditions, the last of which took place in August 2011.

The wreck lies with the bow pointing to the north-east and stern to south-west, resting on the starboard side at angle of roughly 30 degrees. The most intact part is the bow where the name LUSITANIA is still visible on the port side. The starboard anchor is still firmly in place. Most of the bridge structure has slid down the starboard side of the wreck into the debris field scattered on the seabed.

Portholes and windows of all shapes and sizes line the length of the wreck, many of which still contain their glass. There are numerous holes and openings along the starboard side of the hull, some original, others due to salvage work. A few of the ship’s railings still stand proud. Occasionally tiled areas are exposed, including the mosaic tiling in areas once well trodden by the first-class passengers.

Two blades from the one remaining propeller are visible poking out from underneath the wreck. Scattered all over the wreck are numerous small artefacts, such as light fittings, Cunard china and the occasional personal effect.