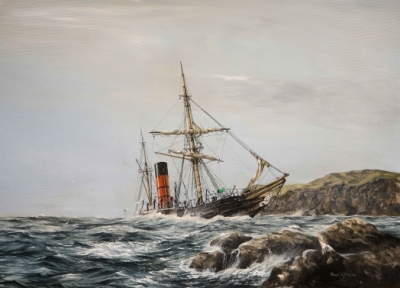 The Malta was a modest iron passenger cargo vessel built by J. & G. Thomson, Glasgow. The ship was launched on 9 October 1865 and entered service on 20 February 1866. The bow was adorned with a magnificent golden female figurehead. The Malta initially serviced the transatlantic routes but later switched to the Mediterranean service.

The Malta's final voyage left Liverpool on 14 October 1889, bound for Genoa and Venice. Malta was carrying a full complement of passengers and 2,000 tons of general cargo. The next day she ran aground in poor visibility under the cliffs of Lenidjack Castle, approximately half a mile from Cape Cornwall, near Land’s End.

The wreck lies roughly east/west, with the bow pointing in towards the cliffs. It is fairly flat, with the highest parts standing little more than 2m proud. There is still a significant amount of wreckage to explore. Due to the shallow depth of the wreck, kelp grows abundantly across the site for much of the year.