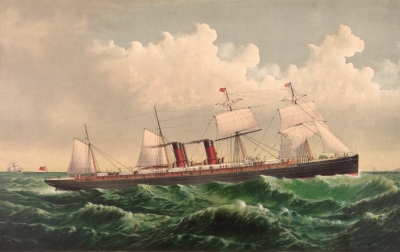 The Oregon was built by John Elder & Co. at the Fairfield Yard, Glasgow, for the Guion Line and launched on 23 June 1883. In 1884 the ship took the Blue Riband for both the Westbound and Eastbound crossings. The vessels impressive speed earned her the nickname ‘Greyhound of the Atlantic’.

The Guion Line was having financial difficulties and Oregon was sold to the Cunard Line in May 1884. In 1885 the Oregon was briefly requisitioned by the British Government for war service and fitted out as an AMC although she never saw active service.

As the Oregon was heading towards New York on the night of 14 March she was struck on her port side by a sailing schooner, thought to be the Charles H. Morse, approximately 18 miles off Fire Island, Long Island. The collision resulted in the Oregon being badly holed below the waterline and the ship eventually sank with no loss of life.

The Oregon lies at depth of 40m (130ft), with the bow pointing due north and the shallowest part being the engines at 25m (85ft). It takes several dives to cover all of the wreck. The starboard side is higher than the port side, where the wreckage slopes down into the seabed. The bow is the most intact and recognisable part of the original hull. The nine boilers are an impressive feature, along with the giant compound steam engine which stands high above the wreck. The stern is one of the most distinctive parts of the wreck featuring the huge steering quadrant.

There is an abundance of marine life.