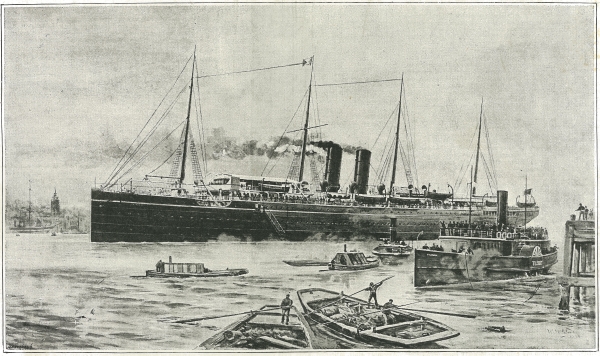 Australia (2) was built for P&O by Caird & Co., Greenock, and launched on 29 July 1892. Single screw powered by triple-expansion steam engines. Accommodation for 265 first-class and 144 second-class passengers.

Unsurprisingly, given her name, the Australia was destined for use on the Australia service, for which she was joined by her sister ship, Himalaya (2), launched earlier the same year. Both vessels were an improvement on P&O’s popular Jubilee class of 1887–88 and included a first-class dining room, which ran the full width of the main deck.

On Friday 13 May 1904 the Australia (2) sailed from England for the last time, under the command of Captain Francis Cole. In the early hours of 20 June the ship went aground on the Corsair Rock off Point Nepean while entering Port Phillip Bay, Melbourne. No lives were lost. A full inquiry into the stranding of the Australia concluded that the accident was caused entirely by pilot error and that neither the master or any of his officers were to blame. The wreck and cargo was salvaged and later dispersed by explosives.

The wreck of the Australia (2) lies scattered and broken across a wide area in a general depth of 5–7m. A substantial amount of the wreck still remains and makes for an interesting dive. The most significant features include the propeller shaft, boilers and parts of the engine. There is a lot of tangled and twisted metal providing lots of nooks and crannies to investigate.

Despite the shallow depth, diving in the area can be difficult and dangerous. The dive can only be undertaken on a slack tide and with consideration for passing vessels in the busy shipping lane.

Excellent video of a dive to the wreck of the Australia.