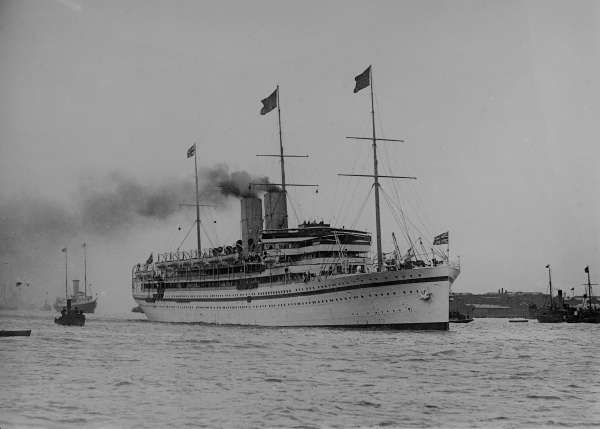 Medina was built for P&O by Caird & Co., Greenock, and launched on 14 March 1911. Twin screws were powered by quadruple-expansion steam engines and there was accommodation for 460 first-class and 216 second-class passengers. The ship was the last in the series of ten M-class ships that commenced with Moldavia (1) in 1903. Within days of the launch it was reported in the press that the Medina was to be chartered by the Admiralty and commissioned as the royal yacht to carry King George V and Queen Mary to the Delhi Durbar. After completing a successful inaugural voyage for P&O in 1912 the Medina became firmly established alongside the other vessels on P&O's fortnightly UK–Australia mail service.

Late in the afternoon of 28 April 1917, just three days after the loss of the Ballarat (1), the Medina was hit by a torpedo fired by UB 31. The torpedo struck in the vicinity of the starboard engine room, instantly killing the fourth engineer and five lascar crew. All the remaining passengers and crew managed to get away in the lifeboats, which were taken in tow by local boats and destroyers to Dartmouth and Brixham.

Despite numerous salvage operations that have taken place over the years and the ravages of time, the Medina remains in good condition. The most impressive and intact part of the wreck is the forward section which stands upright with a slight list to port, whereas the stern area is detached and very broken. The top of the wreck was once reported to be as shallow as 39m and although it is now showing signs of collapse, the Medina still stands 15m proud.

The upright hull is still lined with rows of portholes and a lot of handrailings remain in place. The stern section is less interesting but a highlight is one of the massive boilers.