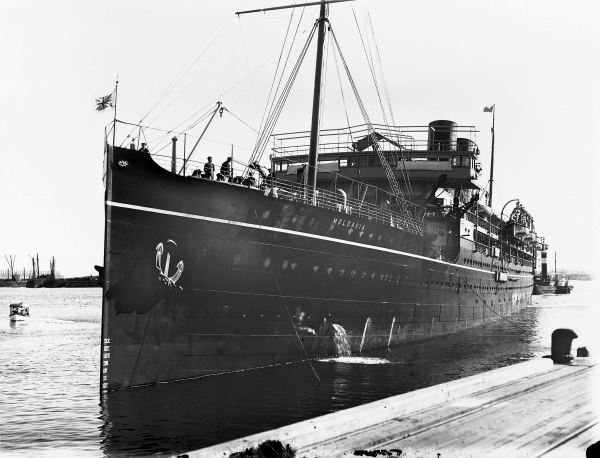 Moldavia (1) was built for P&O by Caird & Co., Greenock, and launched on 28 March 1903. Twin screws were powered by triple-expansion steam engines. Accommodation for 348 first-class and 166 second-class passengers, with a crew of 370. The Moldavia (1) was the first of four new M-class passenger liners, and at the time of her launch was the largest P&O vessel to be built. The ship was primarily employed on the Australia service.

Following the outbreak of the First World War the Moldavia (1) continued to make regular voyages to Australia, up until November 1915 when the vessel was requisitioned for use as an AMC. After undergoing conversion the ship was commissioned into the Royal Navy as HMS Moldavia on 1 February 1916 and placed under the command of Acting Captain Adrian Holt Smyth RN.

On 11 May 1918 the Moldavia (1) sailed from Halifax, Nova Scotia, as escort to the five merchant vessels in convoy HC.1. There were close to 500 American troops on board, many of whom belonged to the 58th Infantry Regiment of the Fourth Division. The ship also carried a similar number of naval officers and ratings. In the early hours of 23 May most of the troops were sleeping soundly in their bunks and looking forward to disembarking in London the following morning when they were awakened by a violent explosion. The Moldavia (1) had been struck on the port side, just below the bridge, by a torpedo fired by UB 57 of the Flanders Flotilla. Over fifty men from B company who were sleeping in the compartment where the explosion took place were killed instantly.

The Moldavia (1) lies on its port side, with the shallowest point near the stern at around 37m. The wreck is largely intact, but with a notable break around the midships section where the torpedo struck and where later salvage operations took place. The hull is lined with portholes, many of which still have glass in them. On the starboard-side hull near the stern is one of the eight 6lb guns, pointing menacingly up towards the surface.

The stern has a distinctive appearance where the outer hull plating has fallen away, leaving the exposed ribs arrayed in a crescent shape. Both bronze propellers have been salvaged, leaving just the exposed shafts and rudder.

At the exposed midships area are two boilers, one of which has opened up to reveal dozens of the tubes. Items of interest include remains of cabins, winches, lifeboat derricks, water tanks and bollards.

The bow section is one of the highlights of the Moldavia (1) but sadly starting to collapse. However, it is still possible to see the anchors, chains, hawse pipes and winch gear.